A few years back, quite a few, we were very fortunate to backpack around the world and see just how amazing it is, just how much humans are screwing it up and how much they are screwing each other. We kid ourselves if we consider ourselves in any way civilised. With 780 million people without access to clean drinking water I think we are as much in the dark ages as we were over half a millenia ago. Anyway I guess that’s another story. So we spent a lot of time in South America and at one point found ourselves in Uyuni in Bolivia. This town is the gateway to the famous salt flats and sits at 3700 metres so is a bit chilly at least for us. It is also the site of a fascinating train graveyard about a kilometre or two outside the town. It appears that when steam engines were no longer used they drove them out to the desert. When we were there and hopefully it has changed you could just clamber over these industrial monsters without having to pay anything. Such a shame since it so obviously be a tourist attraction. Considering the distance from the town we found this locomotive 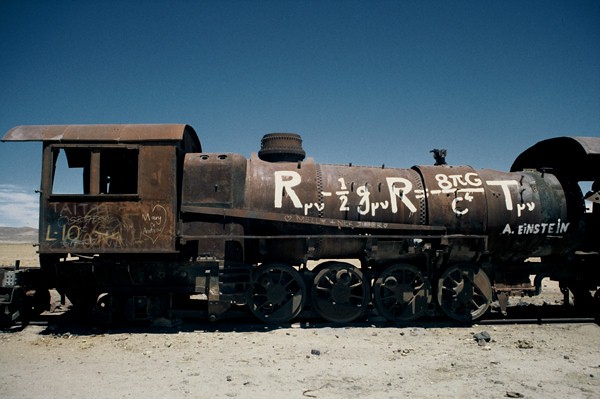 daubed in white paint with an Einstein equation painted on the side. What do we call this, technical graffiti, technical street art, it is certainly an interesting piece of work.